Make sure to get your tickets soon for London’s anime, gaming, cosplay and comic event! 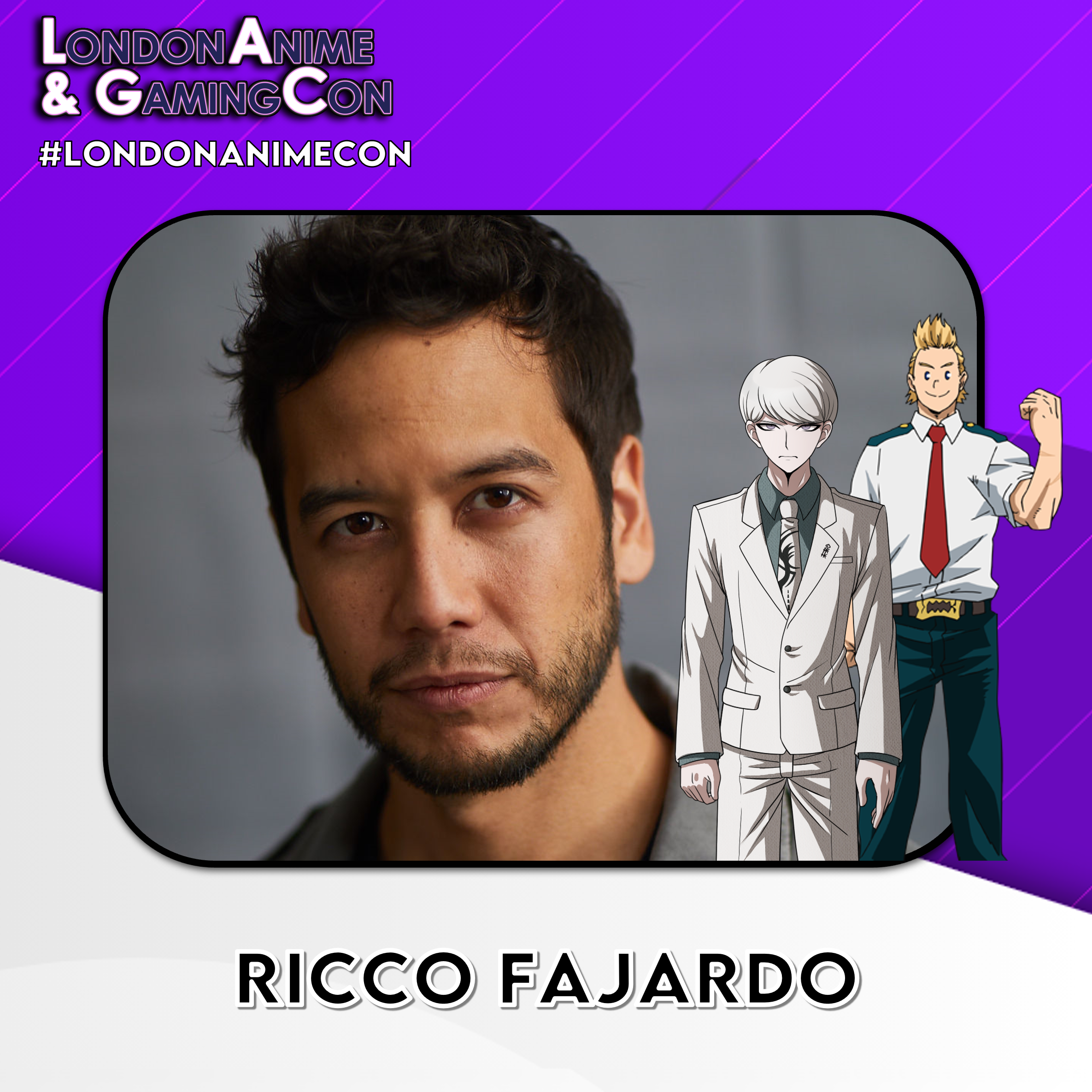 Ricco Fajardo is an American voice actor. He is best known for voicing Mirio Togata in My Hero Academia, Taiju Oki in DR. STONE, Itona Horibe in Assassination Classroom, Kyousuke Munakata in Danganronpa 3: The End of Hope's Peak High School - Future Arc, Takuru Miyashiro in Chaos;Child, Tor Kokonoe in Absolute Duo, Mage Nanashiro in Dance with Devils, León Luís in Garo: The Animation and Daryun in The Heroic Legend of Arslan. 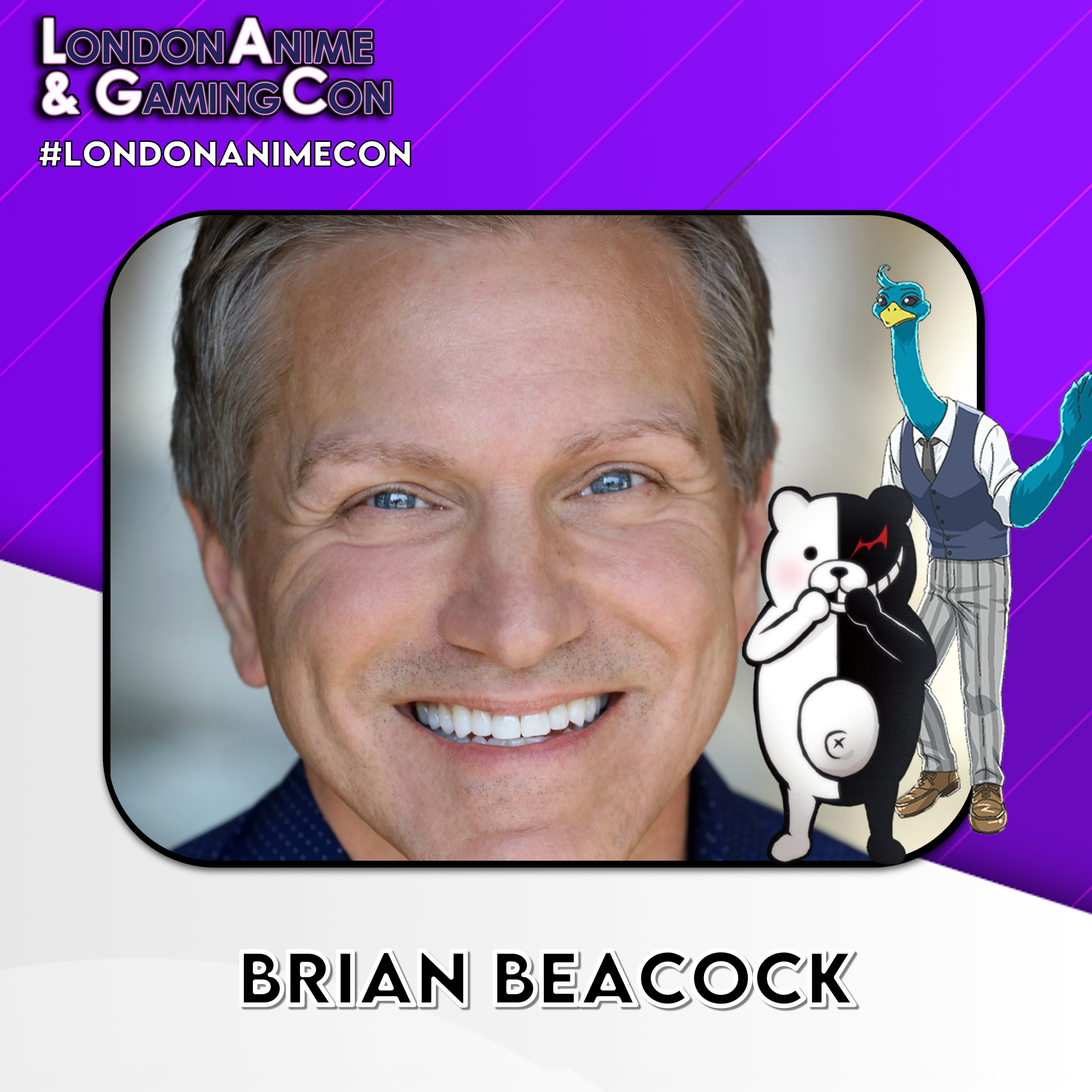 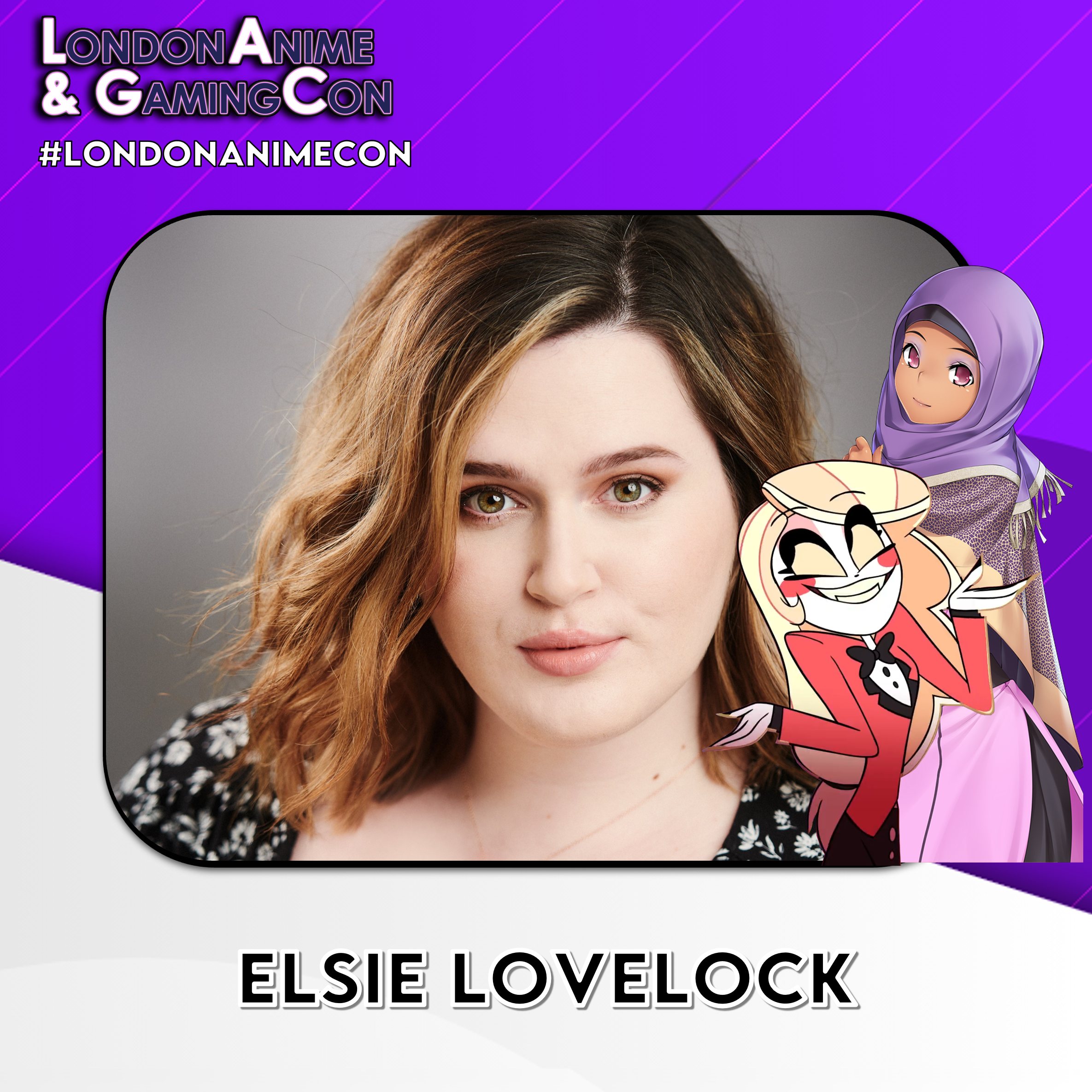 Elsie Lovelock is a British voice actor and singer who has been acting since the age of 16. If you're active on the internet, odds are you've probably heard her voice somewhere or other – you just didn't know it!
She voices for an absolute plethora of different kinds of projects, from video games, animations, mobile games, and TV commercials, as well as singing on the tracks of different albums and soundtracks from a wide range of artists. She has her own YouTube channel where she covers songs from Disney movies, Anime, Video Games, Cartoons and more, with a total view count of over 50 million.

Most notably she can be heard in Vivziepop's popular original animated cartoon pilot, “Hazbin Hotel” as the singing voice of its main character, Charlie. Other animated projects she has voiced in include Mom in SrPelo's popular “Spooky Month” series, Evelyn in 3D animated series “Meta Runner”, and much more which include notable animators and YouTubers such as Team Four Star, ScottFalco, Saberspark, Dan Bull, Aphmau, ScrewAttack!, JelloApocalypse, SmashBits Animations, PopToonsTV and many more.

Some of her video game credits include Lunalu from Granblue Fantasy in the card game SHADOWVERSE, “Jennifer” from Remothered: Broken Porcelain, Mabel in “Lust From Beyond”, and many many other games such as Popup Dungeon, Wargroove, Strangeland, and more projects to come!

If you're a Pokemon fan and active on Twitter, you may have heard her as the unofficial voice of the meme, the “Scottish Pokemon Trainer”.

On television, she was a contestant as a singer on Britain's Got Talent (ITV) and All Together Now (BBC).

She continues to work regularly as a voice actor and singer, and is extremely excited to be guesting at LAGC! 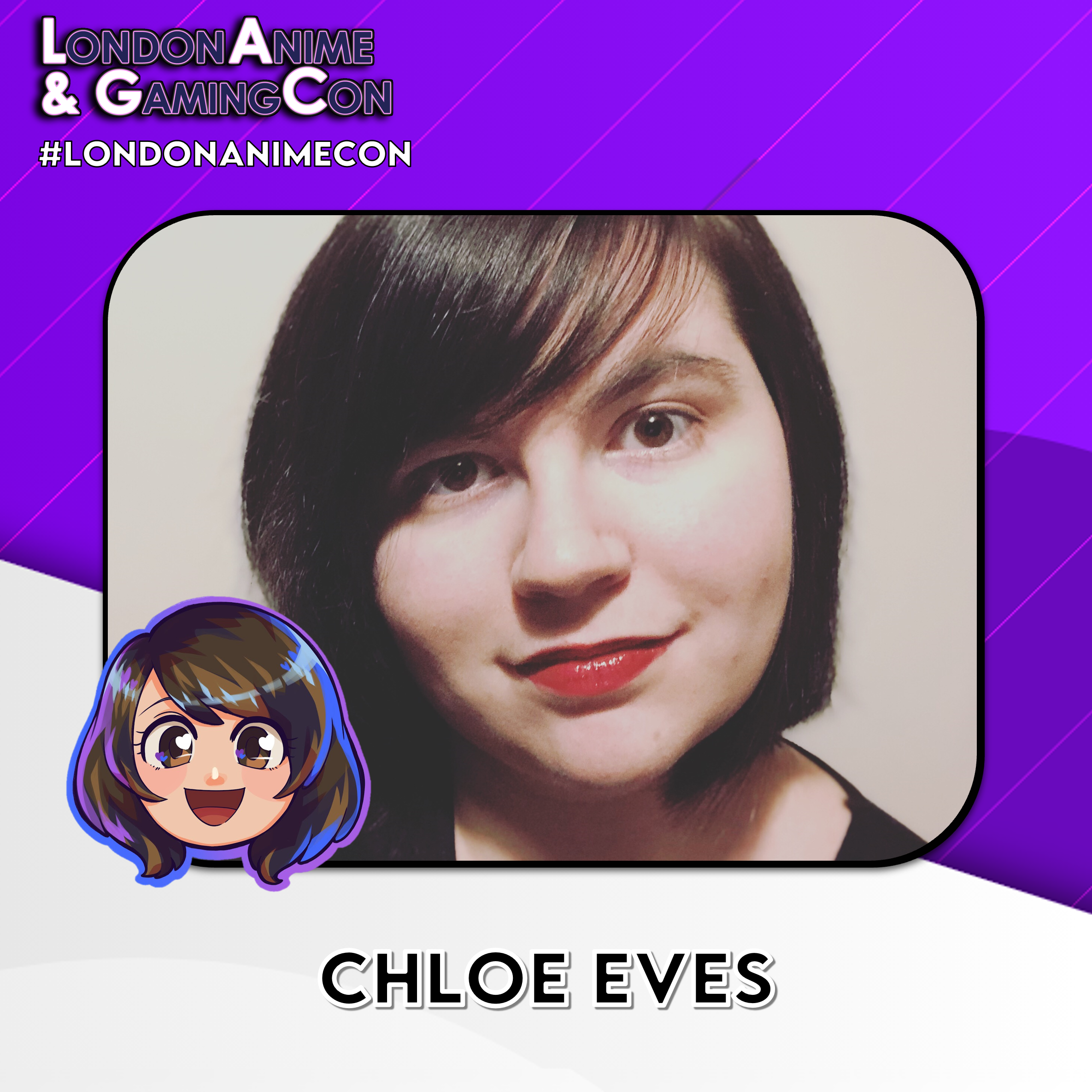 Chloe Eves is an Irish, non-binary voice actor and director based in the UK. They are best known for their work on "Hex" from Dawko and "Nissa Revane" in Magic: Legends. Other notable projects and games Chloe has featured in includes "Story of Seasons" from Marvelous Games, "If Undertale was Realistic" from Smashbits, "My Sweet Zombie" from TsundereStudios, "Flappatron" from Manning Media and their multiple works from singing to voice acting for projects from DAGames, CG5, Dexter Manning & Bantermation. 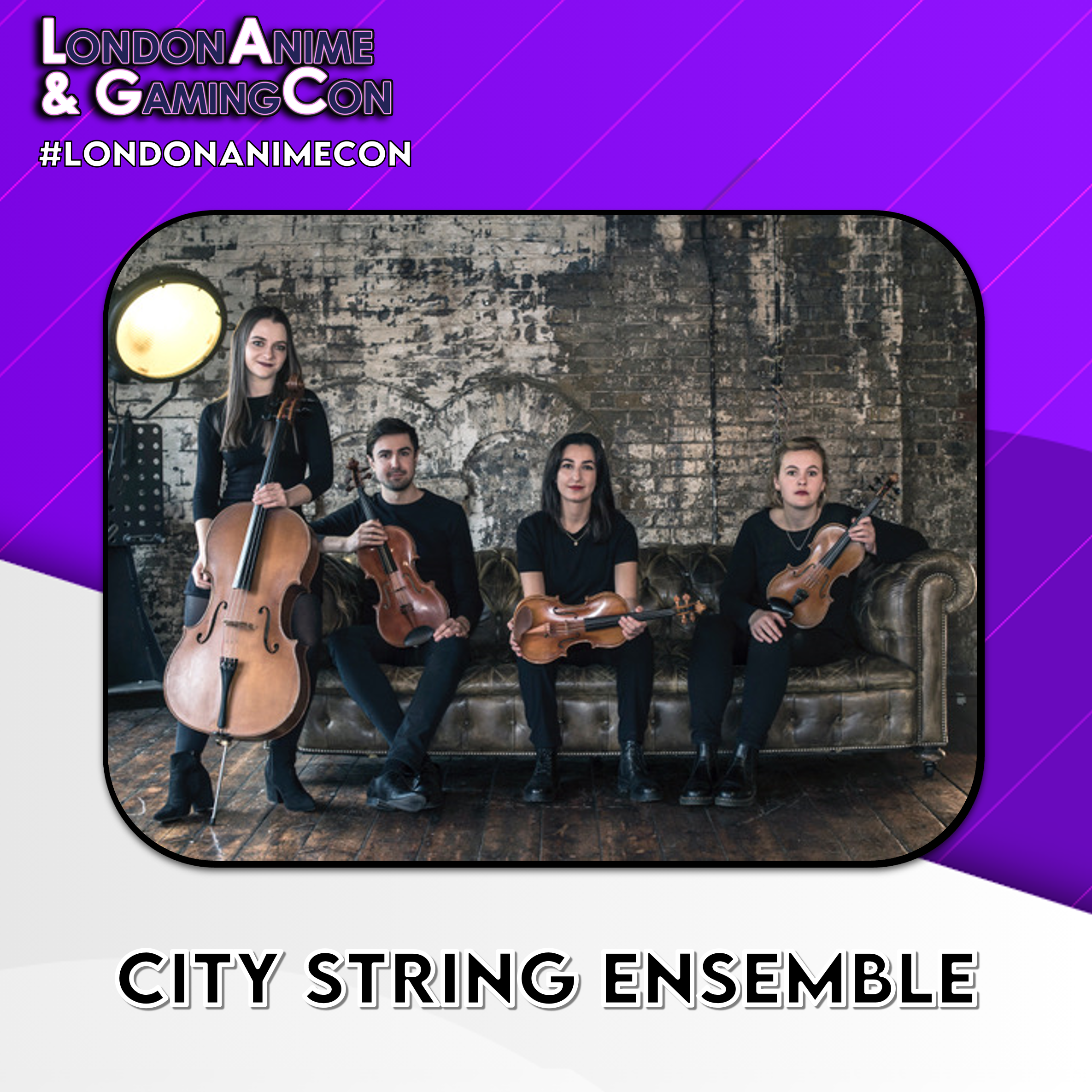 City String Ensemble is a versatile string ensemble based in London. Originally formed at the Guildhall School of Music & Drama, CSE has gone on to grow from a highly soughtafter string quartet to a full-scale string orchestra and can be seen regularly performing multiple programmes of “candlelight concerts” across London, as well as recording and releasing their very own classical twists on well-known songs.

Since 2016, they have been performing across London and the UK, establishing
themselves as the ensemble of choice for many award ceremonies, celebrity parties and special events. In 2019, a sister-ensemble in Los Angeles, USA was formed, extending the CSE family to North America.

This versatile group of classically-trained string musicians has reimagined some of their favourite and most iconic songs, challenging the preconceptions of what classical musicians and classical instruments are capable of. They released their debut EP, “Twenty Twenty,” in 2020 before following up with their second EP, “Throwback…to the Millennium” in 2021.

City String Ensemble is passionate about breaking down the wall between classical
musicians and “popular” genres of music and write arrangements that are completely true to the original songs. A unique feature of CSE’s music is their ability to acoustically create their own beat in their performances with the violin “chopping” technique. This beat propels their arrangements to a new level, channelling each songs groove while maintaining the ensemble’s classical roots. 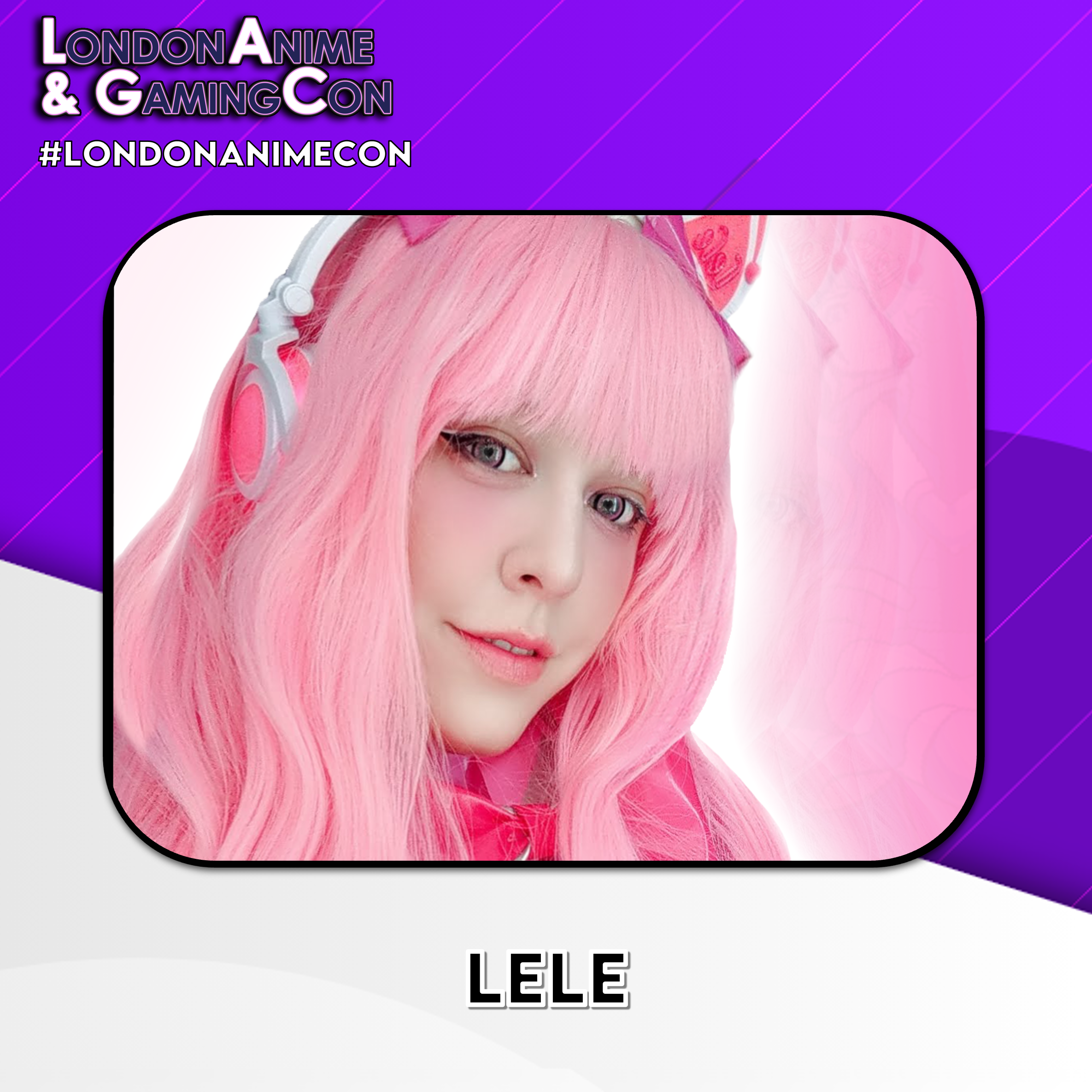 LELE is back with a brand new live show in 2022! Originally from Australia, LELE gained popularity after debuting in Tokyo as an official artist for Japan Music Week. Her unique blend of Japanese inspired electropop has been received by fans worldwide as a SMASH hit success, with spectacular performances across Australia, Japan and the UK. Her music is found in anime commercials and heard within interviews with some of the largest names in anime voice acting. With vibrant, Harajuku inspired costumes, prizes and catchy songs - LELE is a colourful personality that is NOT to be missed! 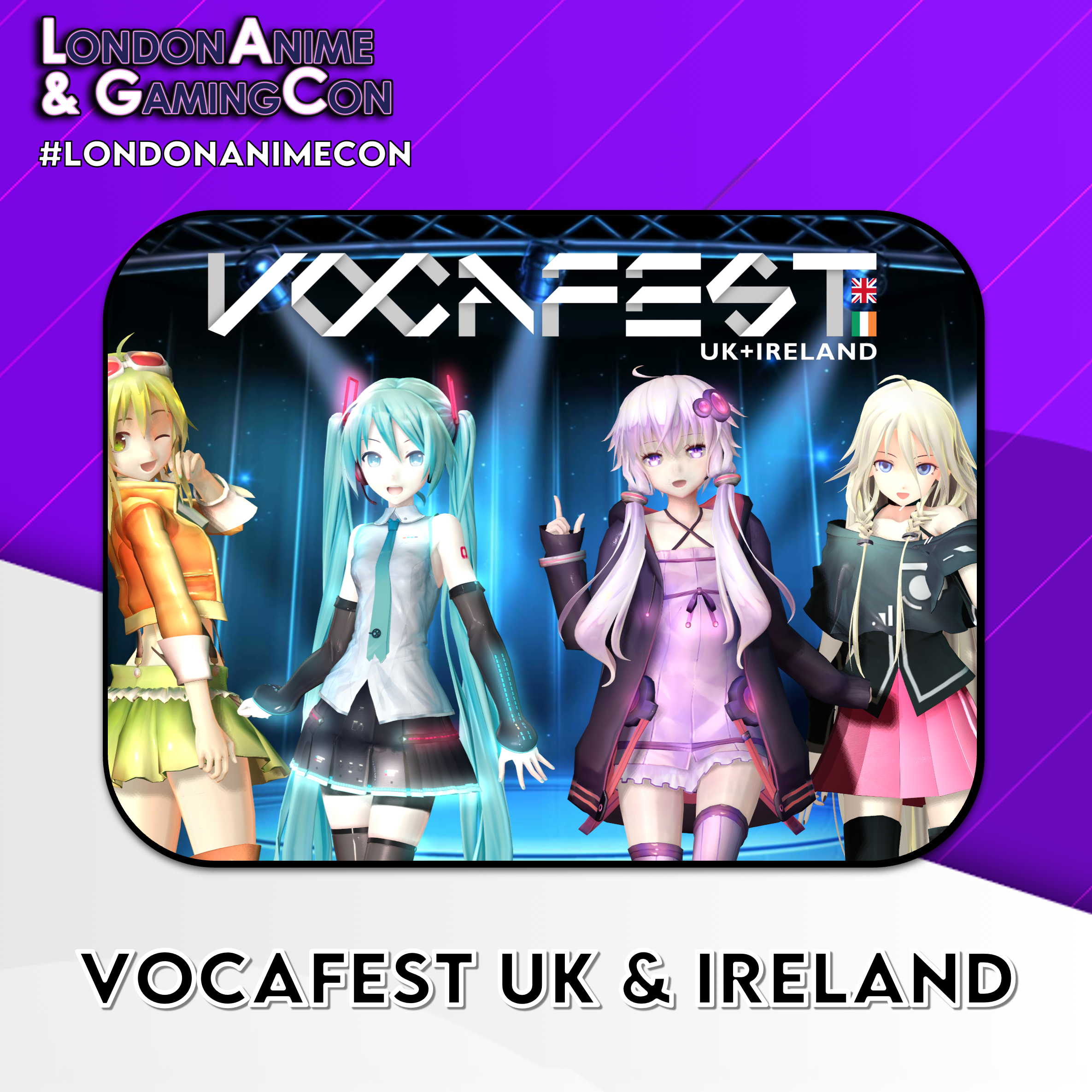 VOCAFEST UK & Ireland - We are a fan organised Vocal Synth event group, we create a range of Online and Real life events for any VOCALOID Fans!!
We have created a fan MMD Concert, featuring popular synths such as Hatsune Miku, Yuzuki Yukari, MEGPOID GUMI & IA!!
We hope you're excited to see some of your favourite digital divas perform on stage for you again!! 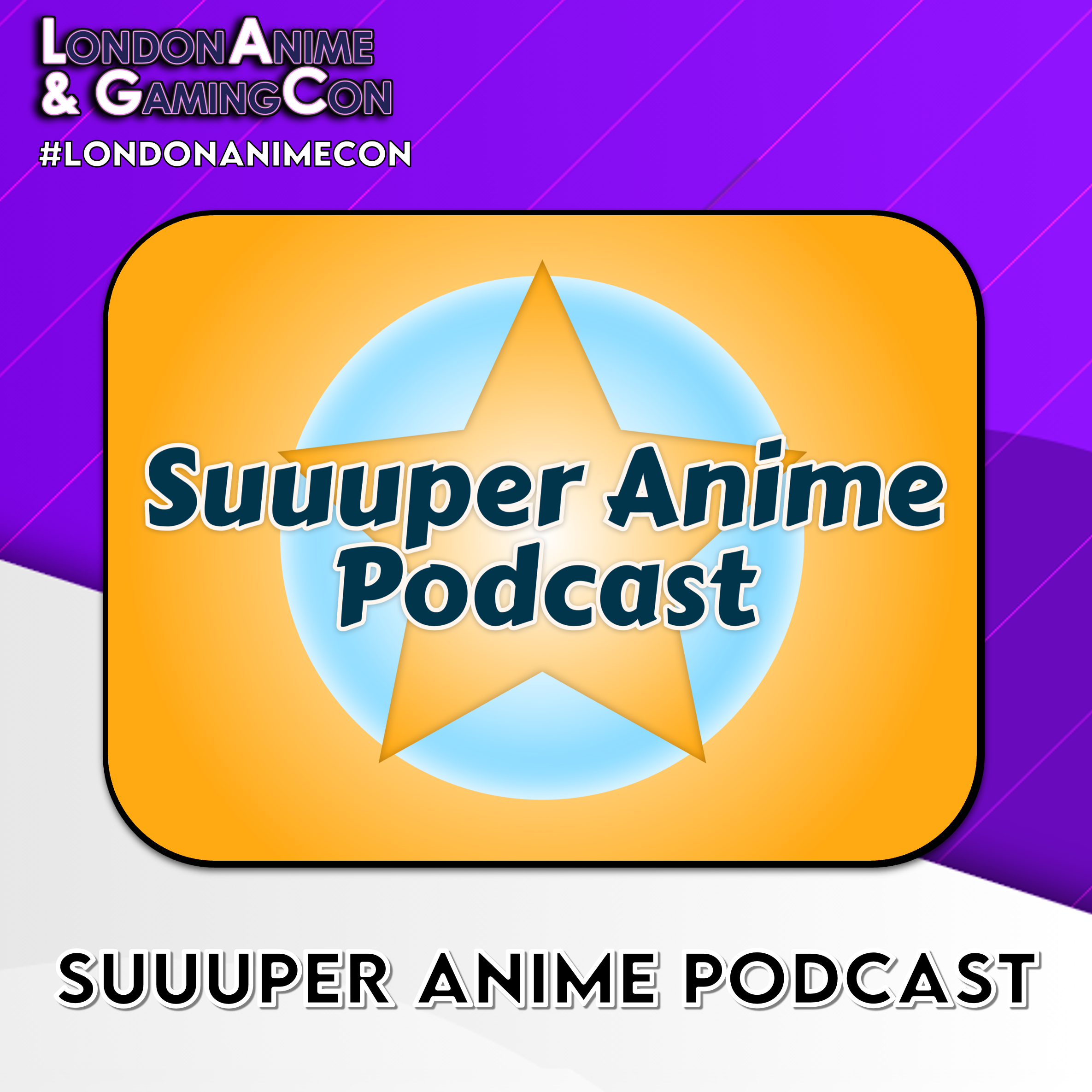 Listened to now in OVER 100 Countries! The Suuuper Anime Podcast is a show that looks to entertain, inspire and inform you about anime. We provide our opinion and thoughts on various anime topics, as well as look at it from a real-world perspective on what we can learn from anime. Whether you’re new to anime or a seasoned veteran, we invite you to come listen, share and laugh with us :-). We hope every episode ignites your otaku spirit and leaves YOU feeling SUUUPER! 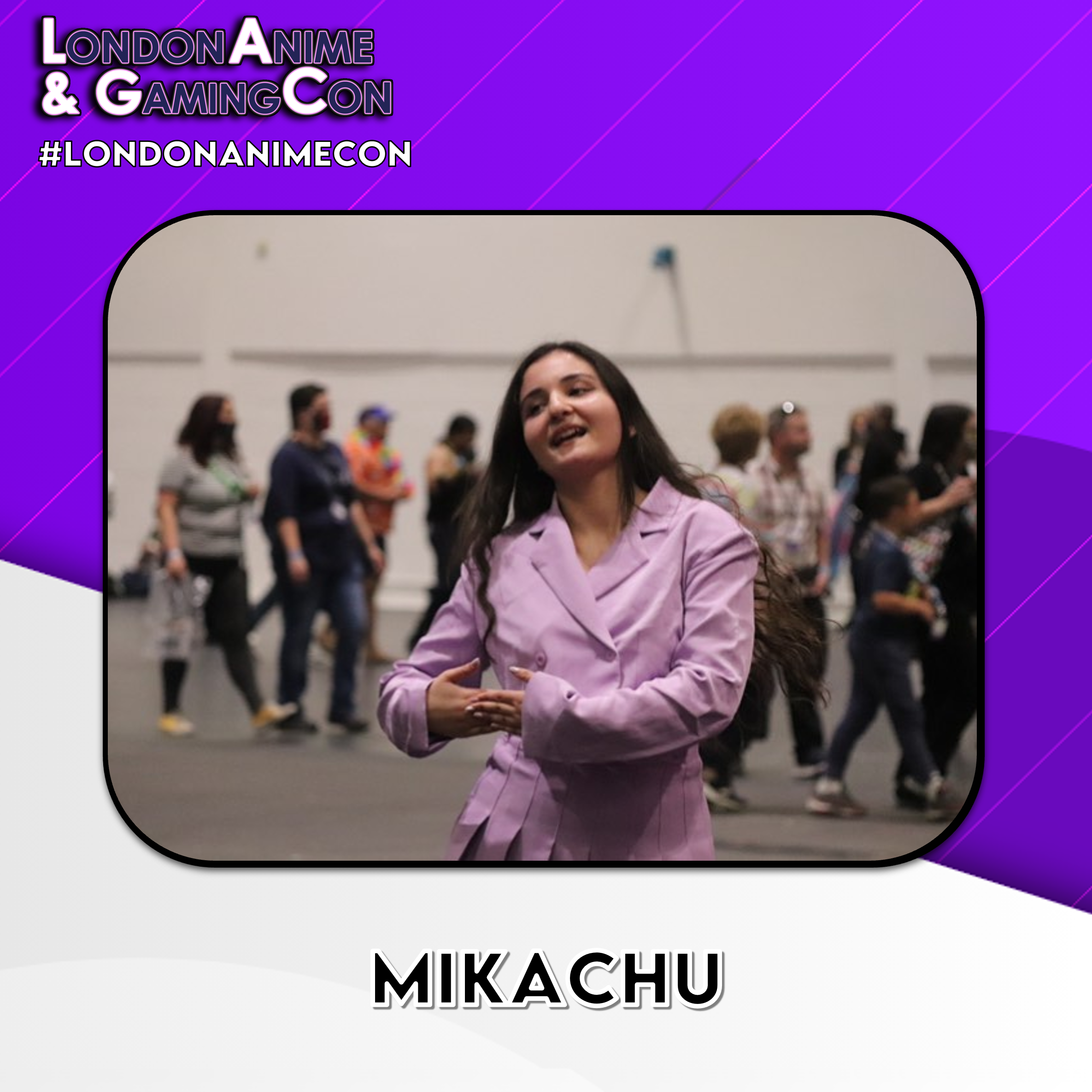 Mikachu is a British artist and streamer based in London, UK. She has a passion for dancing and creating music in different languages, including Japanese, Korean and English. 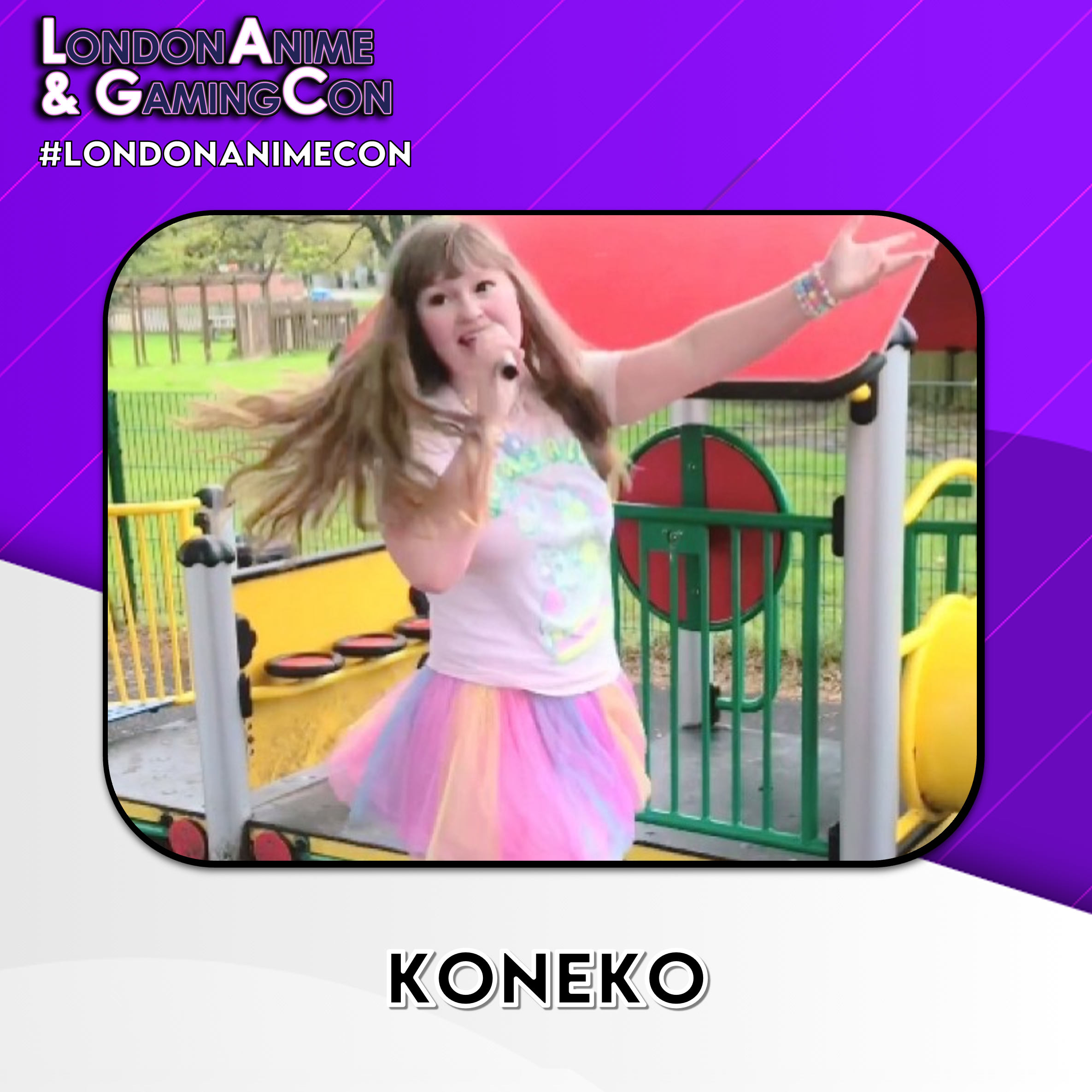 Grab your pink penlight and get ready to fall in love with Scotland’s meowgical idol! With a selection of upbeat J-pop covers and adorable original songs, Koneko is here to sing and dance her way into your heart. 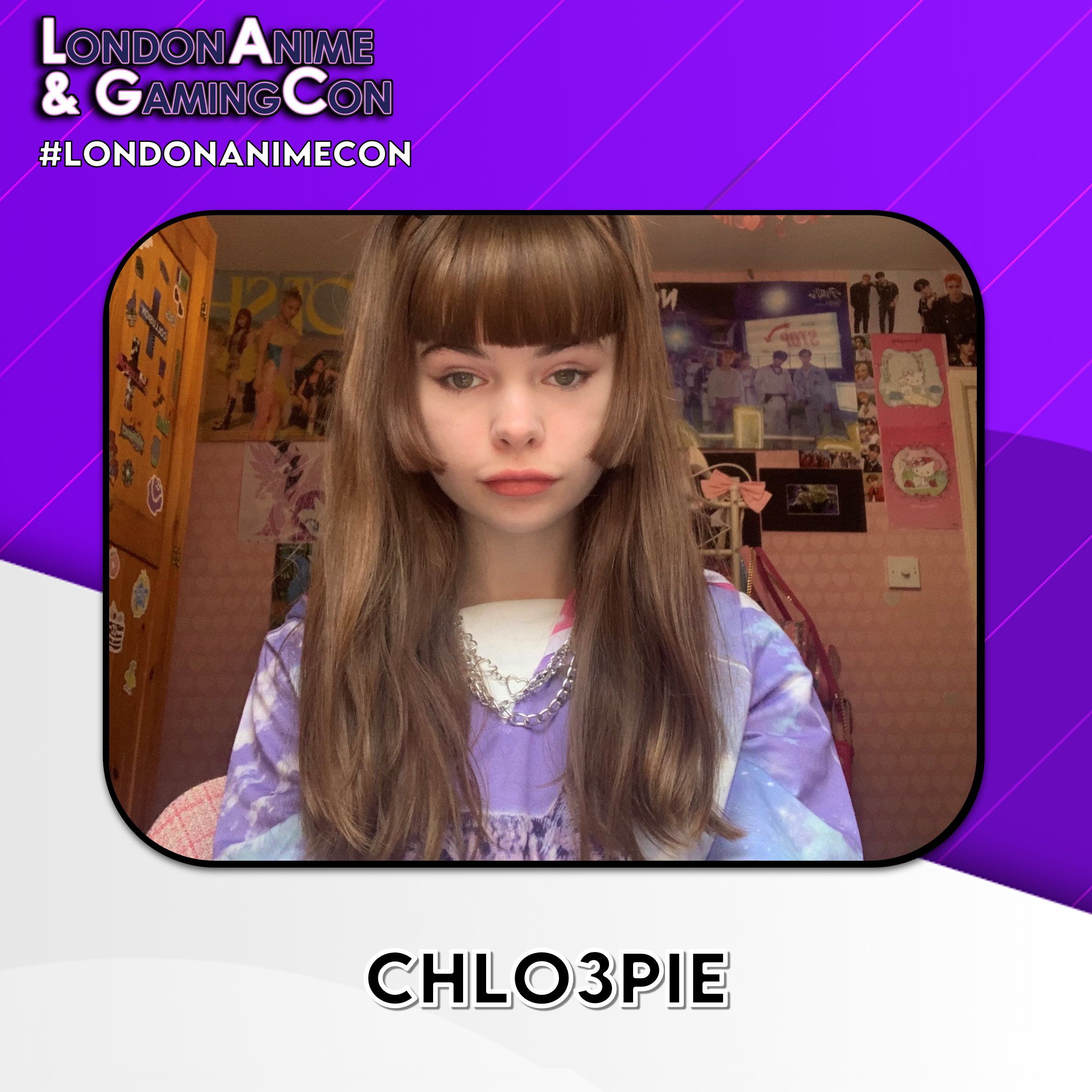 "I am a J-fashion blogger from the UK!" They are looking forward to bringing the world of J-fashion to London Anime & Gaming Con this February. Make sure to follow them on social media @chlo3pie Jenny Hayes is the rock idol of the UK! Heavily inspired by the Japanese rock scene, varying from visual kei to alternative idols, Jenny aims to showcase her love of J-rock through her singing covers and original music!! Unleash your inner tiger when she hits the stage and let's rock! Grimmbun is a twitch streamer from the UK and is looking forward to showing you the basics on how to grow your Twitch channel. Press X are a London rock band that write songs based off popular video games. Their music spans several genres, blending an eclectic mix of citypop, hard rock, and 8-bit chiptunes. They'll be livestreaming a set full of songs from anime openings and games! French 20-year-old pop/electronic singer, songwriter, and producer based in London, Dariasirene makes her dreams possible by her own strength. Entirely songwriting and producing her songs, Dariasirene began playing the accordion and learned to sing at a very young age. Discovering her first manga aged 9, Dariasirene fell in love with Japanese culture ever since. Signature wings and angelic voice, capable of singing whistle notes, she also draws and designs her album covers and visuals. Inspired by artists such as Hatsune Miku and Yoasobi, Dariasirene combines her passion for electronic music and anime by creating her own genre which she calls Electro-Angel music. 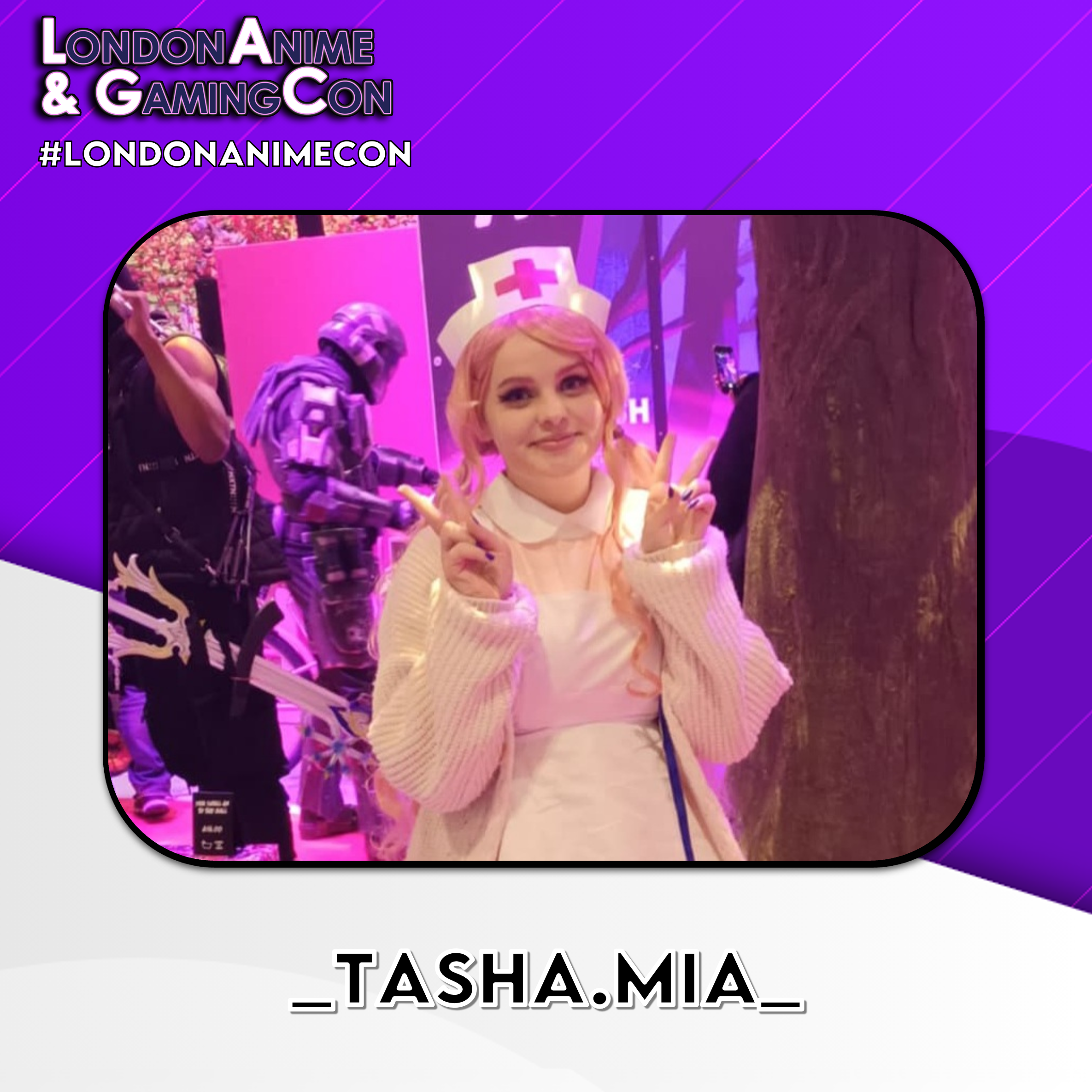 Tasha is now in her 5th year of cosplaying. She mainly cosplays from pokemon and my hero academia and is passionate to pass on the skills she's learnt in the last 5 years to new cosplayers and make lots of new friends along the way.

Come get involved with Anime & Gaming Con over our social media platforms!

Latest updates and any questions you may have! .

Retweet all the latest updates!

Heart all of the amazing community pictures being featured.

Connect with other members of the community and keep up to date!